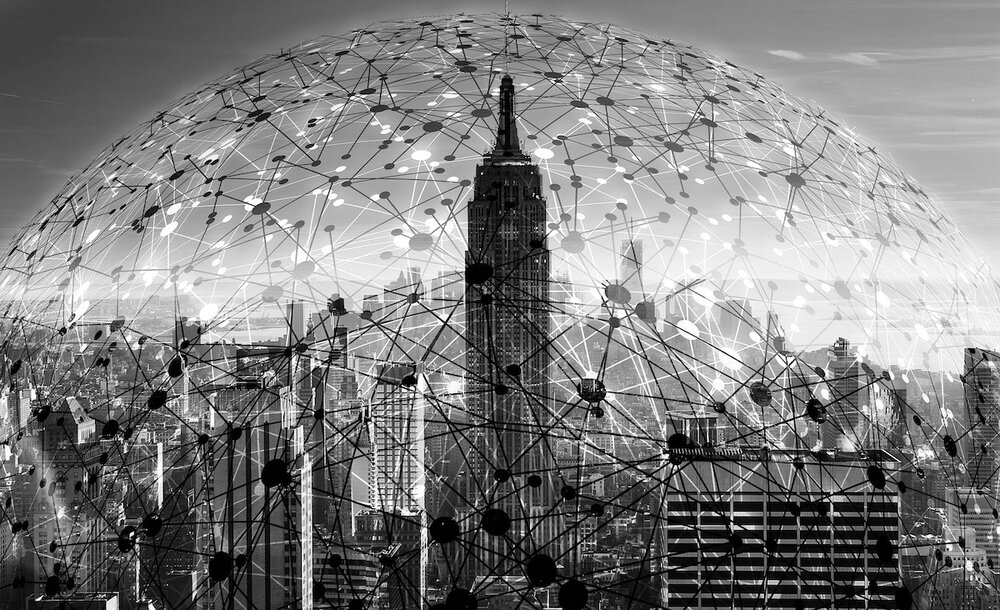 As we are shifting towards a decentralised economy, new opportunities are rising. Central banks have embarked on a number of CBDC projects. Digital business models are extending to physical goods and non-fungible assets that are represented by tokens on a blockchain, unlocking trillions of euros in illiquid assets and creating revenue streams. The arrival of tokenization has fundamentally changed the way we invest and raise funds.

The process of tokenization refers to issuing blockchain-based tokens that can be traded, stored and transferred in the digital world. These tokens exist on the chain, act as a store of value and carry the rights of the assets they represent, while the real-world assets backed by these tokens continue to exist “off-chain.” This concept isn’t new. A typical example of tokenization is “‘air miles” programs that can be converted into specific goods, services or flights. Digital tokens follow the same approach.

“Since we are now also able to tokenize physical assets by using blockchain technology, we can add liquidity to segments that have been thus far underserved by capital. The more interesting aspect of tokenization is that we are driving it in order to democratise certain aspects of economic activities—and that we will also increase the playing field for our macroeconomy by adding resources that we have been using without transparent price tags. The last point worth mentioning is that a blockchain-based token will always be able to transport more rules than a normal share or stake in an asset or a process—or in theoretical terms, the capital, the means of production and the (more or less clever) ways to operate them can become one.”

In the traditional financial world, investment barriers can be extremely high. Think about the amount of investment required to buy a real estate asset or a piece of art. With tokenization, we can lower the minimum investment threshold, allowing even small retail investors to diversify their portfolios and enter the previously exclusive markets that were only for large investors and high above their reach.

UNLOCKING THE VALUE OF ILLIQUID ASSETS

Through fractional ownership, traditionally illiquid assets can unlock their liquid potential and become tradeable on secondary markets, thus allowing a broader base of investors to participate in the ecosystem.

Tokenized assets allow faster transactions with less administrative burden. Through the use of smart contracts, many cumbersome manual processes can be automated and streamlined, while the clearing and settlement processes can become simplified and more efficient.

With an immutable record of ownership, tokenized assets allow for improved traceability and transparency. Each record is documented on an immutable shared ledger that contains the whole history of activities performed over an asset. This ensures that relevant parties have a clear view of the updated ledger of ownership records.

With the financial ecosystem struggling to achieve interoperability within its fragmented borders, tokenized assets remove physical barriers and geographical or infrastructural limits.

“Impact investing should become an awful lot easier as well as more widespread, with increased transparency and smaller parts of the investments being used up by middlemen and overhead parts of the respective value chains. Also, we will see a renewed design of value chains since we will have more options to “anchor” the points of settlement in the physical world—think of the possibilities for fully automated shop floors with autonomous machines in the production space—where the provenance and usage of energy, the space used, the ad-hoc usage of machines, materials and access to other machines can all be processed and automatically settled between one or more token systems.”

FROM CARS TO ANCIENT ARTIFACTS, THE WORLD IS GETTING TOKENIZED

We can tokenize all kinds of assets, ranging from real estate and art to commodities or even virtual assets, such as securities. In fact, according to the research and surveys from institutions like the World Economic Forum (WEF) and Deloitte, a large part of our future economy will be driven by the tokenization of both digital and physical assets, and the business value-add of blockchain will grow to slightly more than $176 billion by 2025 and exceed $3.1 trillion by 2030.

Early examples of tokenized physical assets can be tracked to items, such as bottles of wine, pills or even jewelry. These items, which are usually part of the supply chain from a producer to a consumer, can then be tracked in real-time to identify and prevent potential malicious use.  And that’s exactly what IBM did in 2019. Pacific International Lines and IBM ran a successful pilot to track a 28-ton shipment of mandarin oranges from China to Singapore on the IBM Blockchain Platform. But IBM isn’t the only one.

In the sunny Bahamas, PO8 Ltd, a blockchain-powered startup in the marine archeology space, tokenizes underwater artifacts worth billions of dollars. By combining blockchain, artificial intelligence and robotics, the company is able to tokenize underutilised underwater cultural heritage assets and reshape their ownership with Non-Fungible Tokens (NFTs).

As shown in the examples above, tokenization of physical assets has a range of use cases and applications, but let’s focus on the most promising ones.

In 2019, the global real estate market reached the incredible value of US$830 billion. Still, the sector also represents one of the most illiquid asset classes. To obtain ownership of a real estate property, one has to buy an entire property and overcome high entry barriers, cumbersome transaction processes and substantial administration costs.

Tokenization of real estate can fractionalise the ownership of a property into a number of tokens, where each token represents a share of the property. The tokens are accessible to a broader base of investors and can be traded on various exchanges, lowering entry barriers and reducing the friction between buyers and sellers.

Some exciting projects have already emerged. In October 2018, a luxury $30 million Manhattan condo in New York became the first real estate tokenized on the Ethereum blockchain. The next year, Mata Capital, a French asset manager, tokenized a Paris hotel to attract a larger pool of investors and reduce minimum investor subscription amounts. The resulting €26 million issuance became one of the largest real estate tokenization projects in Europe.

Why gold? The reason is simple. Throughout history, gold has been a reliable store of value for investors, ensuring stability through times of economic uncertainty and financial volatility.

Tokenizing gold can reduce bureaucracy with holding, storing and transferring the asset. Investors are purchasing the rights to real physical gold, safeguarded in vaults yet at the same time easily accessible on the ledger. Due to the immutable nature of blockchain, there is no possibility to sell the same ownership certificate to multiple people.

The Universal Protocol Alliance—a consortium of blockchain-related companies consisting of Bittrex Global, Ledger, CertiK, and Uphold—has already leveraged the power of tokenization and launched a token backed by the Perth Mint. The Perth Mint is the largest refiner of new gold in the world and is owned by the Government of Western Australia. The tokens, named “Universal Gold” or UPXAU, were launched in October 2019. Backed one-to-one by GoldPass certificates issued by the Perth Mint, UPXAU tokens can be purchased from $1 and are free to hold.

In 2019, JP Morgan also revealed plans to tokenize gold bars on the Ethereum network and represent them on Quorum, its enterprise blockchain. The company’s head of blockchain initiatives, Umar Farooq, disclosed the information in an interview with Australia’s Financial Review. He further explained that data about gold bars will be represented on Quorum’s distributed ledger, allowing buyers and sellers to validate that their gold comes from socially responsible mining operations.

However, the growing contemporary art market hasn’t changed its business model for decades, which, over time, led to a lack of transparency, high investment barriers, low liquidity and various copyright issues.

Tokenization of art pieces could solve some of these challenges and open the art market for the broader public. It is also an efficient way to create an immutable registry of art copyright records, provide liquidity with lower fees and increase transparency for all participants in the ecosystem.

A little-known startup called Maecenas introduced a blockchain-based art marketplace that tokenizes art pieces and allows everyone to buy, sell and trade part ownership in masterpieces. An artwork is tokenized and divided into tokens that can be sold at a fraction of the cost. The tokens can be purchased by bank transfer, credit card or cryptocurrencies, and smart contracts ensure a fair and transparent process and distribution.

In 2018, for the first time, Maecenas successfully tokenized a multi-million dollar work of art, a painting by Andy Warhol—14 Small Electric Chairs (1980). The auction included 100 handpicked participants who could purchase fractions of 14 Small Electric Chairs with Bitcoin, Ethereum or the ART token. The beta auction raised US$1.7 million for 31.5% of the piece at a valuation of US$5.6 million.

Many other exciting projects have emerged over the years. For instance, RIDDLE&CODE has formed a joint venture with RDI Digital and the renowned Moscow-based Tretyakov Gallery to investigate the use of blockchain for micro-investment into works of art while ensuring their authenticity and origin.

Over the course of the next decade, there will be a fundamental change in the way we invest, from traditional investment tools, such as multiple bank accounts, portfolios and funds, to digital investment platforms that are fully interoperable, easy-to-use, available 24/7, safe and trustworthy.

“Most likely, the most promising use case for tokenization still lies in the future. Right now, we are keeping ourselves busy with the question of where tokenization will have an impact first. It is clear that several industries will adopt the use of (internal) tokens to incentivise certain processes or use cases and that a bigger part of our current industrial use case will only be tokenized or become programmable if a digital version of the respective fiat currencies, such as the Euro, is made available by the financial system. Otherwise, it will be almost impossible for industry players to adopt tokens if these values cannot be booked properly by the financial departments.”

And that is one of the topics that we will cover in our upcoming tokenization blog post series, where we will explore how to actually tokenize an asset, the types and purposes of tokens and regulatory frameworks of the token-based economy.